Before my memory fades, I want to jot down our current schedule with Baby B. I kept a loose journal with both of my older boys and it’s been a good reference for me to refresh at different points during these infant weeks and months. Though I won’t be using it as a future resource, I also like that I have a record of their baby months. So for any mamas of newborns, infants or future mamas who might want to check out a ‘real-life’ schedule. This is what our nights/days look like with Baby B.

Let me preface the post by saying that the schedule below is a fluid one. B is our third baby, so it goes without saying that this once rigid, OCD-type first time mom is just a shadow of what she used to be. Baby B is pretty flexible and goes with the flow. I’m not sure if that’s just the way he is or it’s by default of having to follow his two older brothers’ schedules. But, I’m glad that at just shy of seven weeks, we have some semblance of a ‘schedule’ on a daily basis.

8am: Baby B wakes for the day and has 4 oz of breastmilk. He usually has a dirty diaper after this feed and we change him out of his pajamas and/or sleepsack for the day. He is very awake for the first hour or so and loves people-watching. His big brothers take turns smothering him in their slobbery kisses. D, my mom or I take turns holding him and doing tummy time or carrying him around. He’ll usually fall asleep around 9:30/10, but it’s usually a light sleep.

11am: Same cycle as the morning, except we’re usually out and about running errands. He thankfully naps well in the car seat most days. I try my best to time his naps and my pump sessions around our outings. But that’s not always feasible, so I just pack my Medela Freestyle (aff link) with me and pack a bottle to go.

2pm: Again, same cycle, B consistently takes 4oz (sometimes more) every three hours now that he is nearly 7 weeks old. When he was closer to the one month mark, it was more like 3 oz. Sometimes he goes two hours between feeds, sometimes four. He goes longer when his afternoon naps are long because we are out and about and he’s usually asleep either in the carseat or on me while I wear him.

5pm: At this point in the day, he has his final 4oz feed before the bedtime routine at 8pm. We’re busy getting in dinner for us and the older boys, so B is always in and out of short catnaps on his DockATot (aff link) at home. If we happen to be out, this is the hour that he sleeps a hard, long nap. I’m not sure why, but this time of the day seems to be his deepest sleep for daytime.

8pm: We try to start bath time with all of the boys around 7/7:30, sometimes it’s earlier (hello the countdown to bedtime is real). And sometimes it’s later. But, usually they all get a bath and we do story time together in A & C’s room. B gets his final bottle for the night. I’ve noticed that the last week or so (weeks 6-7), he takes little bit to wind down from the bedtime routine and doesn’t fall into a deep sleep until 8:30/9pm.

12am: He wakes and takes a small bottle. I change him if he has a dirty diaper, but usually leave it on if it’s just a semi-wet diaper. When he was closer to the one month mark, we almost always changed him at this wake. Also, now that he’s nearing the two month mark, he seems to be waking a bit closer to 1am. Some nights he’ll sleep until 3am. We usually do a quick bottle feed, change him; all while I’m half asleep and in mombie mode. He usually goes back down easily.

4am: When B was one month old, he would take a full 4oz at this feed. Now that he’s closer to 2 months, he sometimes takes a bottle, but sometimes he just fusses a bit and goes back down with his paci. Again, we do a quick bottle feed, diaper change (only if dirty) and put him right back down in his DockATot (aff link), in hopes that he goes back down easily.

8am: We get up for the day and start it all over again. 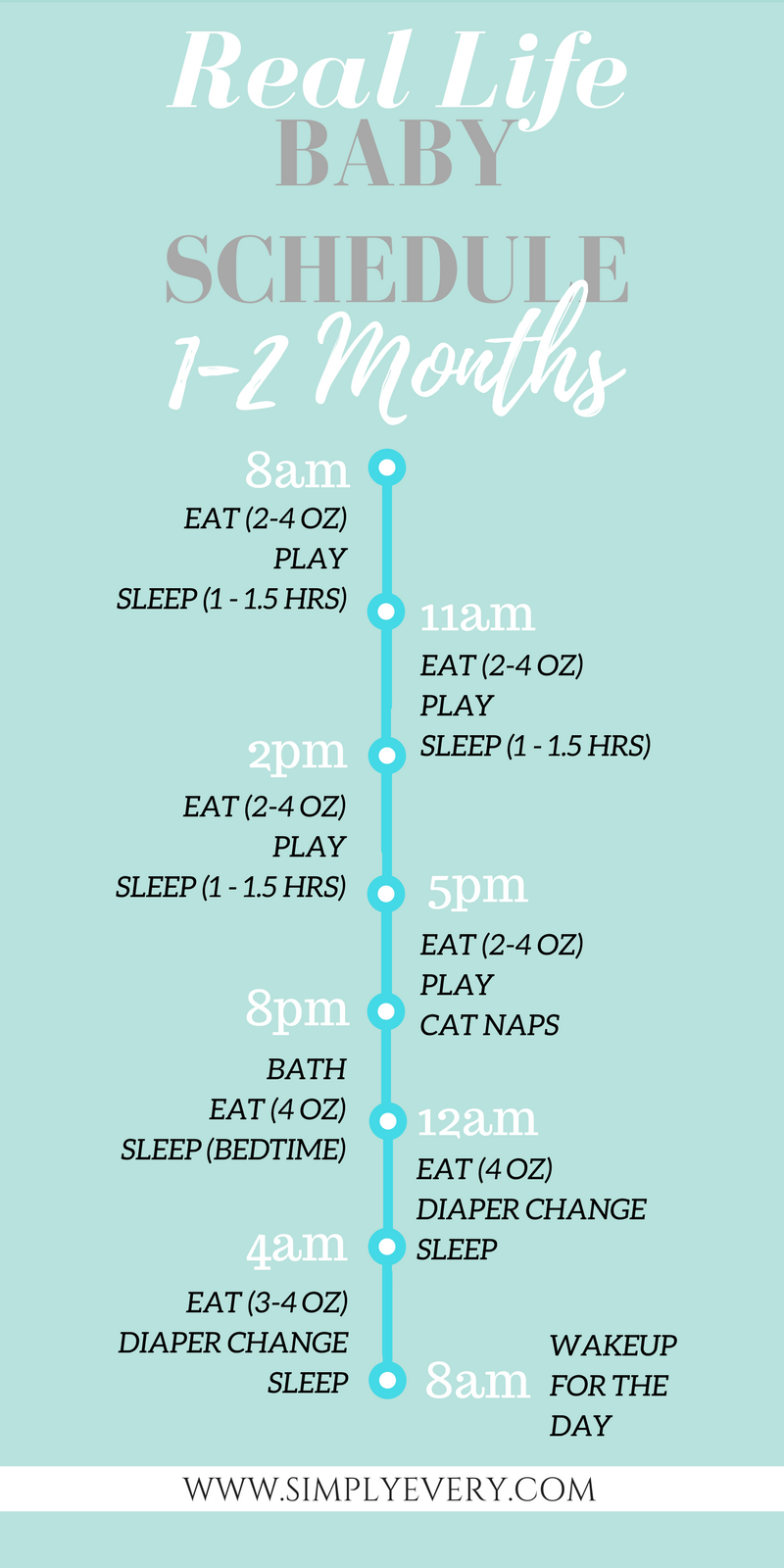